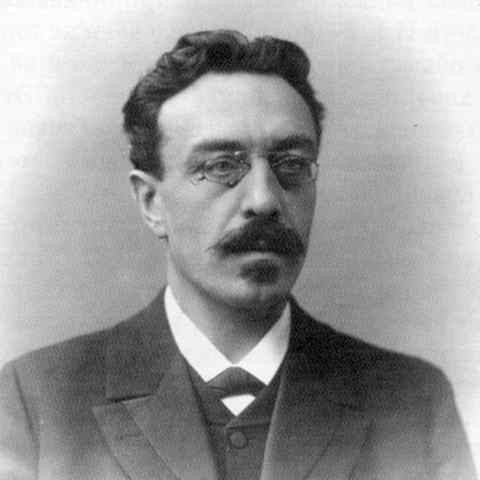 Ppredprinimatel, public and political figure. Actual state Councilor (1907). The Moscow mayor (1905-1912). Brother A. I. Guchkov (leader of the Octobrist party, Minister of the Provisional government). In 1920, emigrated, died and was buried in Paris.

In 1911, Vasily Gurov acquires 20 acres of 980 square yards of uncultivated land to the South 7 acres 830 fathoms, to the North 12 acres 1148 fathom - from the "land book of the Yalta district Council village Gurzuf 1913". Gurov V. V. is building a two-storey cottage "Beaulieu" (former building of the kindergarten) lays the Park and planted an orchard. 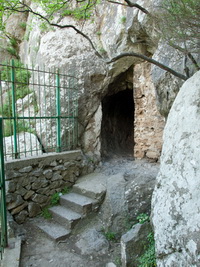 Gurzuf bourgeois Praskovya Tikunova decided to build over the sea suspension bridge to the small of Prinkipo, which was her restaurant "Venice". Turkish workers struck in the dzhenevez-Kaya the tunnel, but work was stopped in 1914 because the First world war (1914 -1918).

The tunnel is the path. For security purposes, on the left of the path is a low wall of rubble masonry, on which stands a metal fence. 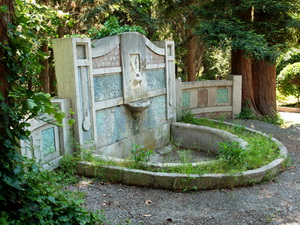 Set in the early twentieth century. The author of the project is unknown.

A fountain (Latin source). In architecture, a decorative structure that serves as a base or beating up or framed by the flowing water jets.

Gorgon – in Greek mythology, three female monsters (Steno(Steno), Euryale, and Medusa), a look which turned to stone all living things.

Of the three sisters of the Gorgons, only Medusa was mortal (Perseus cut off her head). The Gorgon, had Golden wings and hands with iron claws, and the huge heads they have instead of hair, writhing snakes. 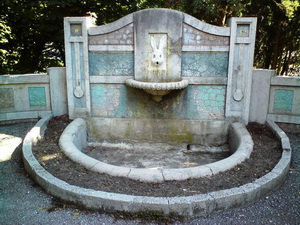 In 1957, in a niche inserted the bas-relief of the head of a rabbit, the mouth of which ran a stream of water. Project author: Nikolay Dodonov, Artek artist.

The fountain basin is made of concrete, is a semicircle (length 5.5 meters, height 0.5 meters), built of rubble stone, plastered. The bottom of the bowl with concrete. In front of the head "Bunny" is a semicircular bowl (now broken). Currently, the fountain does not work. 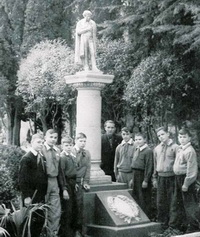 The Monument To A. S. Pushkin

The authors of the project: 1 pioneer squad and Vladimir Tikhonovich whistles, head of "Cypress". 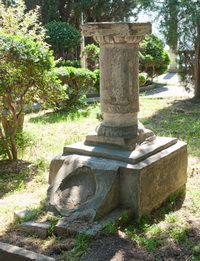 On a concrete base framed by a Laurel wreath, was the text:

Photo 2011 Built in the mid-twentieth century. The author of the project is unknown. 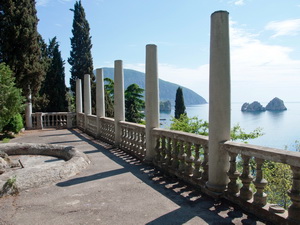 Set in the early twentieth century. The author of the project is unknown. Colonnade – row of columns supporting a girder or arched ceiling. The length of the colonnade 15 meters, consists of 8 concrete light grey columns. Column height 2.95 meters to the base (the base on which the column). Between the columns are 7 sections of 8 balusters made of concrete.

From the colonnade goes down a flight of stairs of 13 steps, built of sandy limestone. For security purposes, the stairs are fenced with iron gate. In 1958 the colonnade called Pushkin: beside her was a sculpture of Alexander Pushkin and the fountain is "goldfish".